You may know the Maltese Archipelago for its stunning coastline, its reputation as a diving hotspot, or its famous festas. But Malta is also home to several Marian shrines recognized for being miraculous.

Ancient Greek literature —whether Homeric or pre-Homeric— is relatively generous when it comes to describing its characters. True, ancient epics do not really seem to care much about minute physical portrayals, rather focusing on the main moral traces of its protagonists, but we do know from some lines of the Iliad that Achilles had “fair” (xanthos) hair (Cf. Iliad 1.197),  that Athena’s eyes are owl-like “bright” (glaukopis, in the original), or that Odysseus’s herald, Eurybates, was round shouldered and dark-skinned (melanokhroos). Sure, all these are the subject of much heated discussion among scholars: how are we to translate xanthos, for instance, considering it is etymologically related to xouthos, a word also used to describe Achilles, and that points at his noted swiftness as much as to his remarkable emotional volatility?

If compared to Greek classic literature, Biblical narratives seem sparse, lacking detail, leaving much to the reader’s imagination when it comes to describing its main characters. Even if the Bible is itself a complex cluster of different literary sources and genres, and that making a claim that applies to all of it is often wrong, one can dare saying biblical authors share a kind of general, overarching lack of interest in providing details regarding the looks of its many heroes and villains. The Bible does not describe, for example, any of the physical features of Moses or David. We only know the former might have been a stutter (or that he didn’t really speak the same language of the people he was leading through the desert) and that the latter was shorter than Goliath, the giant —which is not much to say, really. It is true that by looking at some names and learning their etymological meaning, some things can be deciphered. Esau, for example, might mean either “reddish” or “hirsute,” suggesting he was both hairy and, perhaps, a bit of a redhead.

But that’s the Hebrew Bible. Surprising as it might be, the New Testament says very little (in fact, almost nothing) about how its main character, Jesus, looked like —much less about the looks of the apostles. That’s why artists had to rely, from the very dawn of Christianity, on the artistic canon of their day and age rather than on the actual written testimony of the early Christian communities when they had to portray their Messiah in icons or frescoes. The same goes for Mary, as the scriptures do not provide many details about her appearance either.

Read more:When the plague hit Malta, the Knights made a promise: A Marian miracle followed

One of those artists —tradition holds— is also the author of one of the Gospels. Christian tradition has attributed to Luke many different talents. One of them, that of being an exceptional painter, and the author of the very first “portrait” of Mary herself. Considered the most literary of all Gospel writers, he is not only credited with the Gospel According to Luke and the Acts of the Apostles: Eastern churches consider him as the original “iconographer,” responsible for “writing” the first icon of the Blessed Virgin Mary. One ancient account explains how during the 5th century a Byzantine Empress took an icon attributed to St. Luke all the way from Jerusalem to Constantinople. The Hodegon Monastery was built to enshrine it, and later all copies of this icon became known as Hodegetria. Most believe the original image was lost during the Middle Ages.

This is the very same Luke who was also Paul’s companion and scribe during his trips around the Mediterranean, preaching the gospel. On his way to trial in Rome in the year 60, Paul was shipwrecked off the northwestern coast of Malta and spent the unnavigable winter months there. During his stay, he converted the island’s governor, Publius (Malta’s first bishop and first saint), healed the sick and won souls for Christ, establishing the very roots of Maltese Christianity. Luke tells the story (notice it is written in the first person of the plural, “we”) as follows, in Acts 28:

Once safely on shore, we found out that the island was called Malta. The islanders showed us unusual kindness. They built a fire and welcomed us all because it was raining and cold.  Paul gathered a pile of brushwood and, as he put it on the fire, a viper, driven out by the heat, fastened itself on his hand. When the islanders saw the snake hanging from his hand, they said to each other, “This man must be a murderer; for though he escaped from the sea, the goddess Justice has not allowed him to live.” But Paul shook the snake off into the fire and suffered no ill effects. The people expected him to swell up or suddenly fall dead; but after waiting a long time and seeing nothing unusual happen to him, they changed their minds and said he was a god.

There was an estate nearby that belonged to Publius, the chief official of the island. He welcomed us to his home and showed us generous hospitality for three days. His father was sick in bed, suffering from fever and dysentery. Paul went in to see him and, after prayer, placed his hands on him and healed him. When this had happened, the rest of the sick on the island came and were cured. They honored us in many ways; and when we were ready to sail, they furnished us with the supplies we needed.

Since then —and to this day— the Maltese are among the most passionate Catholics in the world. With an uninterrupted two-millennia long tradition of rich Christian heritage (the Maltese Christian community is as ancient as those of Ephesus, Jerusalem, Corinth, and Rome, thanks to Paul’s providential shipwreck) it is only natural that the country has more than one church per square kilometer. In fact, there are enough chapels and churches in the archipelago for you to attend Mass in a different one, almost every day, for a whole year: a whooping 359 in total. Even the smallest of the islands of the Maltese archipelago, Comino (known for its remarkable crystal blue lagoons) has a chapel —for its less than five residents!

Most of these churches are dedicated to the Virgin Mary, and some of them are known for being places where countless special, miraculous graces have been granted to many throughout the centuries. The many ex-votos covering one of the walls of the Sanctuary of Our Lady of Mellieha for prayers answered —everything from handwritten notes to tiny baby clothes, and even a motorcycle helmet— confirm this is the case, and pilgrims travel in droves to either ask the Virgin for a special grace as much as to thank her for those already received. The next time you are planning a visit to a Marian sanctuary, make sure to consider the Madonna Tal-Ħerba in Birkirkara; the Our Lady of Ta’ Pinu National Shrine, in Gozo; or the ancient Sanctuary of the Immaculate Conception of Qala, just to name three of the many magnificent Marian churches in the country.

Read more:Malta, under the gaze of Mary

The fact that Luke shipwrecked with Paul in the Maltese archipelago might explain why both historical artifacts and oral traditions provide evidence of a very early Marian devotion spread throughout these islands. Luke is not only traditionally credited with the authorship of the very first Marian image of Christianity: his Gospel is the most Marian of them all, and is brimming with the seeds of what would later grow into full Mariological theological developments. In fact, Maltese traditions understand that it is likely that Luke spoke to the islanders about the Mother of the Savior.The many different chapels found all throughout the Maltese landscape are evidence that Malta was, from the get-go, a center of unambiguous Marian devotion. In fact, after the Constantine declared that Christianity to be the religion of the Empire, plenty of Neolithic temples were converted into churches dedicated to Christ and his saints. Those that were dedicated to goddesses were then happily consecrated to the Blessed Virgin by a population that, most likely —again, according to spoken tradition— was already devoted to her.

Make sure to visit the slideshow below to discover some of the most beautiful churches and pilgrimage sites in the Maltese Archipelago. 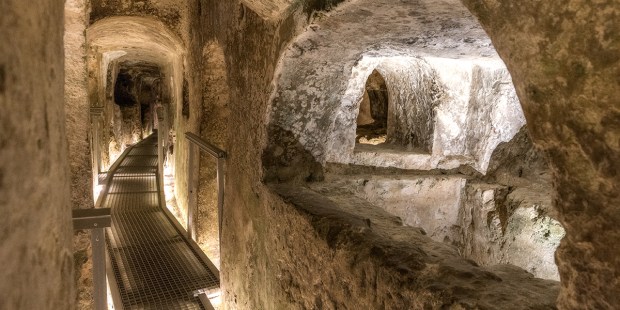