Miracles and prophets: Roaming through the Holy Land of Jordan

Walking the Jordan Trail, one finds the birthplace of Prophet Elijah and the city in which Jesus performed the famous exorcism of the Gadarene.

The Jordan Trail is an almost 700-kilometer-long hiking trail that traverses Jordan from north to south — a unique Holy Land-based, long-distance hiking and pilgrimage trail brimming with biblical references and adventure.

The trail begins in the northwestern town of Umm Qais. After a short one-hour drive from the Jordanian capital, Amman, one arrives at the the well-preserved ruins of the ancient Hellenistic city and can enjoy its impressive panoramic views. From one of its many terraces, still paved with the original Greek and Roman cobblestones, one sees the Sea of Galilee, just across the valley of the Yarmouk River.

Tradition claims Umm Qais was founded as a military colony by Alexander’s Macedonian Greeks, on the remains of a pre-existing one. The town is home to the ruins of ancient Gadara, a city once known for being an important center of philosophical thought. Visitors can still wander its original Roman streets. Tradition claims it was from one of its terraces that Jesus commanded a legion of demons tormenting a man to leave him and enter a herd of swine instead, as recounted in the three Synoptic Gospels. The swine, “numbering about two thousand” according to the Gospel of Mark (cf. Mk 5:13), “rushed down the steep bank into the sea, and were drowned in the sea.”

Tourist guides will show the visitor the exact point where tradition holds the herd of swine began running down the hill, overlooking the sea Jesus himself sailed. Some say the spot, instead, is the place where the people found Jesus standing next to the man once possessed, now “clothed and in his right mind” (cf. Mk 5:15).

In a way, the preaching of the Gospel among the Gentiles began in Gadara, as the city was within the Decapolis – the league of 10 ancient Hellenistic cities formed after the Roman conquest of the region. In fact, some scholars claim the first apostle to the Gentiles was not Paul, but the man whom Jesus met in what is today the Jordanian northwest. “Go home to your friends, and tell them how much the Lord has done for you, and what mercy he has shown you.” (cf. Mk 5:19)

Following the same trail, just a few miles down south, one reaches the place where tradition claims Elijah was born.

Tradition states Elijah was born in Tishbe. In fact, the First Book of Kings presents him as “Elijah the Tishbite.” According to the biblical text, Tishbe is located in Gilead, east of the Jordan river, in western Jordan, precisely where Tell Mar Elias is. For a long time, Tishbe has been identified as the historical town of Listib, due to its location and the similarity between the ancient Hebrew name and its Arabic name, “El-Istib.” Contemporary scholars and biblical archaeologists claim that this Tishbe-Listib might be one of three locations in the vicinity of Tell Mar Elias, also known as simply “Mar Elias,” an exceptionally green and fertile location only an hour and a half from Amman.

Tell Mar Elias is a tell (that is, an archaeological mound, an artificial modification of topography) located slightly outside the town limits of Ajloun, in the biblical-historical region of Gilead. Elias is the Latin and Arabic form of Elijah. On the tell, the remains of a Byzantine monastery and two churches dedicated to Elijah are still visited by pilgrims from all Abrahamic faiths – Christianity and Islam in particular.

The smaller church was built between the 4th and 5th centuries. The larger one, built in the 6th century and recently excavated by Jordanian archaeologists, is currently considered one of the largest known Byzantine churches built in the country. A mosaic inscription found on one of the church floors explicitly mentions Elijah. Special respect is given to a grove of oak trees right above the Byzantine ruins; visitors have traditionally paid homage to the prophet by tying red ribbons to the oak’s branches.

When planning your next pilgrimage to the Holy Land, make sure you include Tell Mar Elias, Elijah’s birthplace, while walking the Jordan Trail. You can follow his path all the way to the River Jordan, where John the Baptist, “the Elijah that had to come,” baptized Jesus.

Make sure to visit the slideshow below to see the historical and biblical remains of Tell Mar Elias in detail. 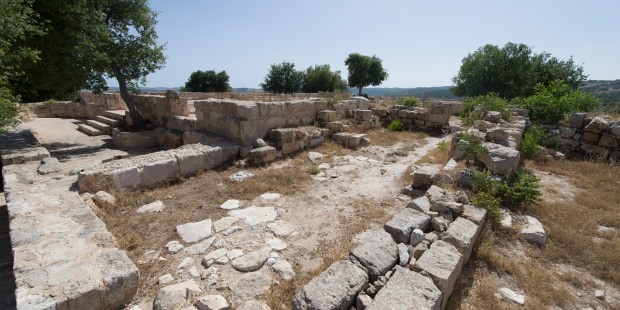 This content has been brought to you in partnership with the Jordan Tourism Board.