Find yourself with the early Christians: Visit Malta’s catacombs

Shrines and churches have their splendors, but the simplicity of St. Agatha's catacombs - where she herself prayed - will bring you back in time ...

The archipelago, strategically located at the very center of the Mediterranean, is famous for its extraordinarily well-preserved prehistoric monuments. Its numerous paleo-Christian and Byzantine structures are also among the most important in the world.

Malta, some say, is one big church. It is, in more ways than one. The archipelago is home to more than 365 churches, and the Maltese often joke saying they could attend Mass in a different church every day of the year if they wanted to.

As explained in previous articles, the landscape of the archipelago lends itself to contemplation. Augustine and other Christian philosophers claimed that one can get a glimpse of God’s perfection by looking at the many beauties of creation. In that sense, Malta is a perfect destination for contemplatives: the archipelago offers exceptional sandy beaches, cliffs rising sharply from its pristine waters, impressive natural grottoes, and lush green valleys to hike through. In fact, all of this natural beauty combined with the richness of cultural history make it an excellent place of pilgrimage, as the founders of the new Maltese Camino know well.

Nevertheless, a look literally beneath the surface reveals even more. An intricate system of catacombs and hypogea makes it clear that Maltese Christianity is as old as Christianity itself. In fact, the Maltese Christian community is as ancient as the communities of Ephesus, Jerusalem, Corinth, and Rome, thanks to Paul’s (providential) shipwreck, as told in the Book of Acts.

Paul’s Shipwreck and the birth of Maltese Christianity

Picture this scene: It’s 60 AD. Paul is sailing across the choppy waters of the Mediterranean, on a ship belonging to the fleet of the Roman emperor. His destination is Rome itself, because the great Apostle is under arrest, and he will be tried in Rome, after being accused of preaching Christianity in Jerusalem.

Thrashed by a storm, the Roman ship capsizes. What sounds like an unfortunate, almost tragic event turned out to be the birth of a 2,000-year, uninterrupted Christian Maltese tradition. On one of the small northwestern islands now known (for obvious reasons) as Saint Paul’s Islets (which you can visit on your next trip to the archipelago), Paul was able to touch land. The text of Acts of the Apostles (27:27-28:5) reads as follows:

“Once safely on shore, we found out that the island was called Malta. The islanders showed us unusual kindness. They built a fire and welcomed us all because it was raining and cold. Paul gathered a pile of brushwood and, as he put it on the fire, a viper, driven out by the heat, fastened itself on his hand. When the islanders saw the snake hanging from his hand, they said to each other, ‘This man must be a murderer; for though he escaped from the sea, the goddess Justice has not allowed him to live.’ But Paul shook the snake off into the fire and suffered no ill effects.”

This scene (that of Paul being bitten by a snake, suffering no consequences) has inspired artists throughout the centuries, becoming one of the favorite themes of Pauline iconography. But, more importantly, it is the same event that led these hospitable locals to understand there was something special about their guest. Many started to listen to his preaching (including Publius, the then Roman governor of the island, who soon became its first bishop and saint), and thus Malta’s first Christian community was born.

Constructed between the fourth and eighth centuries, St. Paul’s Catacombs alone sprawl across an area of more than 22,000 square feet. According to local tradition, they were once even connected to Saint Paul’s grotto, the place where the Apostle took refuge as soon as he arrived on the island.

But Saint Paul’s are not the only Catacombs in Malta: Saint Agatha’s, for example, are comprised of more than 500 entombments, for Christians, Jews, and pagans alike.

Worshipping with the first Christians

Saint Agatha’s catacombs offer a unique spiritual experience. It is said that the saint herself came to the cave here to pray. It became a church in the 3rd century and catacombs developed in the following century. (The story of Agatha is mostly known for her gruesome torture and martyrdom, including the severing of her breasts. But tradition states that she escaped from Sicily to Malta for a time, living in Mdina – then called Melite from the Greek word meaning honey), and would come herself to these caves to pray).

The artwork is in some disrepair, but considering that the frescoes date as far back as the 12th and 13th centuries, with some into the 16th century, the images are unbelievably clear: St. Margaret, St. Lucy, St. Blaise, St. Anthony Abbot, and others, as well as 13 frescoes of Agatha herself. Our Lady of Graces offers the tiny Jesus her comforting breast. Under at least one fresco, restorers have found a 4th-century image.

Leaving the cave and journeying through the catacombs, one discovers the 4th-century frescoes depicting the shell of new life, the pelican symbolic of the Eucharist and others. Various of the crypts still hold the skeletons of the first Christians buried here. An altar near the agape tables for funeral meals enables one to imagine these people gathered in prayer before the Eucharist and one can easily place oneself there with them, these Christians of only 300 years after Christ.

While these catacombs don’t have the golden, gilded splendor of the many churches and shrines of the island, the impressive state of preservation and the simplicity and silence of the place makes it one of the most spiritually poignant of the island.

Visiting the Maltese catacombs and hypogea

After an extensive restorative work which Heritage Malta began back in 2015 (with a budget of around 4 million euros, partially provided by the European Fund for Regional Development), these catacombs can be visited by all those interested in exploring more of this fascinating Mediterranean tradition. St. Agatha’s underwent restoration in 2017, and are open for visitors too.

Aleteia had the opportunity to visit these catacombs and hypogea, and to speak with David Cardona, field archaeologist and excavation director. The interview has been edited for length and clarity.

A.- What are the most relevant pictorial, architectonical, or sculptural elements in these catacombs, in your criteria?

Artistically, the Maltese hypogea suffer from lack of pictorial imagery, as opposed to other hypogea across the ancient Christian world. One does not find, for example, the impressive painted decoration and imagery that one finds in Rome and Sicily. This does not mean that no imagery is present. The floral decorations recently discovered on one Baldacchino at hypogeum 17 within the St Paul’s Catacombs and the painted window tomb of complex 17 within the Wignacourt complex, offer us a clear example of these. More numerous are, however, the carved motifs, primary amongst which are the decorated pillars of numerous window tombs, and the scallop shells motifs found on the hoods of tombs of the same type.

Architecturally, however, the Maltese hypogea provide unique types of tombs, primary amongst which is the window tomb (of which only one example has so far been recorded in Rome,) and the Baldacchino tombs, architecturally impressive burials often found within the hypogea of the Maltese Islands and, to some extent and in different variations, Syracuse.

A.- These catacombs are among the most important ones of all Christian traditions, second only to the ones found in Rome. Why is this fact not so well known?

However, new research in the last decades or so by both Maltese and Sicilian specialist have given a new life to these important sites, ensuring that these hypogea get the notice they are duly deserved.

A.- What are the special features that make Maltese entombments unique in the world?

Apart from the tomb types already mentioned above, the Maltese hypogea contain rock-hewn tables, called triclinia. These tables were probably used for the funerary meals carried out to commemorate the deceased, a rite known to the Romans as refrigerium and Agape to Early Christians.

Similar meals are known to have been carried out in Roman and Sicilian hypogea as well, mainly through textual and pictorial evidence. It is however only in Malta that the whole set-up was hewn out of the living rock and can thus be studied by modern scholars.

Make sure to visit the slideshow below to discover more of these early Christian treasures. 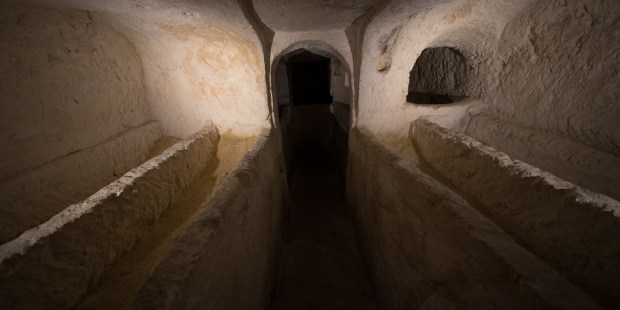 This content has been brought to you in partnership with the Malta Tourism Authority.