Missionary in Venezuela: The physical difficulties of the mission are outweighed by the joys

All these sacrifices are worth it, the Franciscan priest says, to serve the Indigenous peoples of his mission.

“I thank the Lord for having allowed me the grace of living among these beautiful mountains that I love so much, among the Yukpas and the Barís who are for me brothers, friends, companions, and Christians,” says Fr. Nelson Sandoval, when asked about his choice of missionary life and the service he performs among the Indigenous communities.

Fr. Nelson is a Capuchin priest who works at the Missionary Center Los Angeles del Tukuko, in the Sierra de Perijá, Venezuela. Since February 2008, he has been in charge of the center and has been the pastor of the Catholic community there.

Born in San José de Perijá, in the state of Zulia, Venezuela, on October 30, 1970, he entered the Capuchin Franciscan Order in November 1988, and made his first religious profession on September 11, 1995, on the Solemnity of Our Lady of Coromoto, patroness of Venezuela. He made his perpetual profession also on September 11, four years later; his devotion to Our Lady of Coromoto is no secret. He was ordained a priest on August 5, 2000.

This past August 20, Fr. Nelson visited Terakibu, one of the most remote communities of the missionary center, to bring them a little hope. Together with volunteers from the parish’s Caritas organization, he brought health care to children, youth and adults. They also held a soup kitchen event, and shared aboriginal cultural expressions.

Here you can see pictures of Fr. Nelson, the Caritas volunteers, and the mission center: 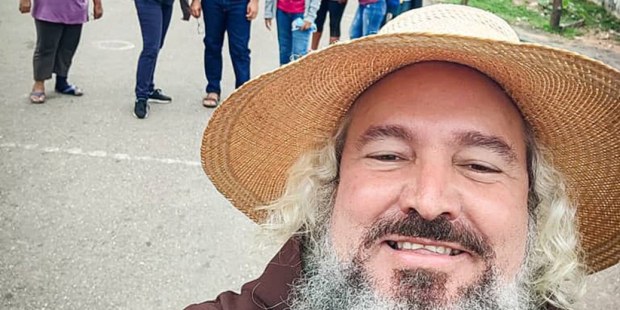 He shared this experience in a WhatsApp group of the National Missionary Council (COMINA, from its title in Spanish) of Venezuela. His testimony did not go unnoticed. After being contacted by Aleteia, he wanted to share part of his experience. Fr. Nelson’s testimony motivates us to opt for a more missionary lifestyle that rejoices in simple things.

The difficulty of missionary life

“But there’s a hint of truth in what they say, and yesterday it was my turn to experience in my own flesh ‘the difficulty of the missionary life,’” he says.

Terakibu is the first of the communities in the upper part of the Tukuko river basin. “I went with the parish Caritas team from the mission. We held a nutritional day and a soup kitchen with the community,” said the Capuchin.

“The river current dragged me along …”

“To get there, the path is the river, which was a bit swollen, and the current was very strong. The third time we crossed the river they offered me a mule, and that’s when my calamities began,” he recounted.

He described some of the sufferings he experienced on this journey: “I fell off the mule, then the river current dragged me along. Once at the community, I hit my head on a pole from the roof of a house, then when we were going back down I tripped over a stone and fell face first into the river. When I got back to the mission, I had a blister on one toe.”

“All those incidents lose significance”

“Never, in so many years, had anything like that ever happened to me,” the priest explains. “But all those incidents lose significance, with the happiness experienced upon arriving at the community and seeing the joy of the people for our visit.”

He then highlighted the hospitality, generosity, and joy he saw on the part of the Yukpas:

One of the things that never ceases to amaze me about the Yukpas is their hospitality. They always welcome their visitors singing and dancing; and with their generosity, no one leaves a community without at least a banana. They gave us so many plantains, topochos (another kind of plantain), and bananas that it took three sacks to bring them all.

“I must say that those are physical difficulties, and that real difficulties are persecution and war, and we haven’t experienced that in our mission,” he said.

Evangelization and human promotion in favor of the Indigenous people

Fr. Nelson Sandoval has worked for three periods at the Los Angeles del Tukuko mission center. In recent years, his work has been linked not only to evangelization, but also to human development based on social work. He makes plans together with the chiefs of the communities to guarantee food, health care, and better living conditions for the Indigenous Yukpas and Barís.

The Los Angeles del Tukuko Mission Center was founded by Fr. Cesáreo de Armellada and Fr. Primitivo de Nogarejas, both Capuchins, on October 2, 1945. It was the feast of the Guardian Angels, hence the name.

A prayer full of meaning

In a prayer he posted in the COMINA group, the friar thanked God for the encounter with those he considers his indigenous brothers. “They are the reason for my missionary vocation and my motivation; may they always lead me to Your presence and may I never disappoint them by abandoning them and leaving their side,” he concluded.