Turin: Home of the Holy Shroud

What is believed to be the burial cloak of Jesus is kept in Turin's Duomo. Besides the shroud, the city has much to offer religious travelers.

The Sacra Sindone, or Holy Shroud, is believed to be the burial cloak of Jesus. It is without a doubt one of the most studied and renowned relics in the Catholic world.

The Holy Shroud of Turin

The shroud is preserved in Turin’s Duomo, or its cathedral, dedicated to St. John the Baptist. Built in the late 15th century adjacent to an earlier bell tower, the Chapel of the Holy Shroud was constructed buttressed against the apse from 1668 to 1694 to house the Holy Shroud.

The Shroud is rarely displayed to the public, but visitors can pay venerate the reliquary box containing it, as well as visit a museum dedicated to it. Many articles have been written about the Holy Shroud of Turin. 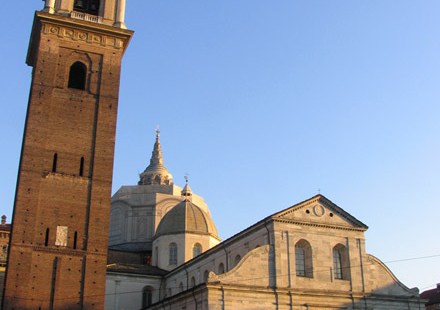 Other holy sites in Turin

Though most Catholics associate Turin with the Holy Shroud, there are other reasons to go on pilgrimage to Turin.

The third chapel in the left nave of the cathedral is dedicated to St. Maximus, the first bishop of Turin. Since 1990, it has housed the tomb of Blessed Pier Giorgio Frassati.

Pier Giorgio was known for his joyful and jesting personality, mountaineering, service to the poor and marginalized, advocacy for social issues, and heroic virtue. He died at the early age of 24 and is frequently held up as a model for Catholic youth.

A short walk from the Duomo is the charming Basilica of Corpus Domini. Here, the “Miracle of the Eucharist” took place on June 6, 1453 while the region of Piedmont was at war with France.

According to tradition, during the sack of Exilles, France, two French soldiers plundered a church, carrying away religious vessels and artefacts including the Blessed Sacrament. They went to Turin to sell their loot. However, the mule that was carrying the consecrated host stumbled and fell, causing the contents to spill out. The Blessed Sacrament hovered up in the air and illuminated the square. The bishop soon confirmed the miracle.

Not far is the Basilica of Our Lady Help of Christians, or the Santuario di Maria Ausiliatrice. Originally part of the home for poor boys founded by St. John Bosco, it houses his incorruptible body, as well as 6,000 relics of other saints, including St. Dominic Savio, a young follower of Don Bosco who died at the age of 14.

Other notable churches in Turin include the charming baroque Church of San Lorenzo, the Sanctuary of the Consoler, and the House of Divine Providence, known as Cottolengo. Also not far from the Duomo are two more stunning churches: Santa Cristina and San Carlo.

Beyond the churches, the city of Turin has a rich culture and royal past. It is known for opulent palaces, art galleries, theaters and opera houses, museums and other venues.

Its regal past and royal heritage is due to its former home to Italy’s royal family, the House of Savoy. When Italy unified in the latter half of the 19th century, it was the Kingdom of Turin, under Garibaldi, that initiated the unification process. Other personages, such as Cavour and Garibaldi, were also from Turin.

The city’s main secular attractions include: