Pro-life organization Live Action held its annual gala to award 3 people who have contributed to the pro-life movement.

The American pro-life organization Live Action held its annual gala dinner at the Ritz-Carlton Hotel in Dana Point, California, a stunning seaside setting, on August 21, to present awards to three outstanding people who’ve contributed to the pro-life movement by fighting for the unborn.

Lila Rose created the Live Action organization in 2003, at the age of 15. She started by working with friends “to make pro-life presentations to groups and shine a light on the reality of abortion” and “expose what abortion does to the preborn child.”

The organization’s activities have since branched out to include undercover investigations and a range of other activities, including videos and other tactics to shift public opinion regarding this grave human rights abuse against preborn children. Aleteia recently featured a striking video the organization produced about the development of a child in the womb.

This year’s Life Awards Gala 2021 was the 2nd annual presentation of these awards, which take the form of a statuette of a woman holding a baby in her arms. These awards “honor outspoken defenders of preborn children and their families within media, politics, entertainment, and activism.”

Here you can see some images from the Gala: 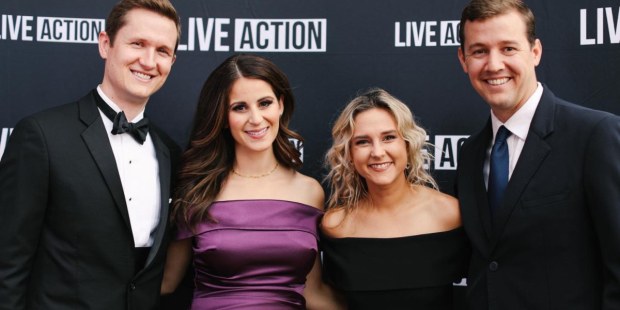 It was in this context that he created and carried out the two-and-a-half-year “Human Capital” investigation, which documented how Planned Parenthood was illegally selling body parts from aborted fetuses. His work made the news in 2015, with hidden recordings of Planned Parenthood staff describing in great detail the atrocities they carry out (and even gloating about the money they get for it).

The second recipient was Katrina Jackson, a lawyer and Democratic senator in Louisiana, and a staunch advocate for the unborn. Thanks to her good work, last November 4 she succeeded in getting an amendment passed to the Louisiana Constitution to exclude any suggestion of a right to abortion. She also authored a bipartisan bill, which the Supreme Court overruled in June of 2020, requiring abortion clinics to be held to the same standards as surgical centers.

The final honoree was Eduardo Verástegui, an actor and producer in Hollywood. His best-known and most awarded work is Bella, a film that deals with the drama of abortion, and adoption as an alternative. It won the People’s Choice Award at the Toronto Film Festival, among other distinctions.

In 2004 he founded the Metanoia Films production company with the aim of producing films that entertain and make a difference in society.

He’s currently producing two new films: Sound of Freedom, with Jim Caviezel, and Mary. Soon, he has announced on Instagram, he will unveil a project he is working on with Mel Gibson.

In a video that was projected during the event, the number 2,363 stood out: It’s the number of babies aborted daily in the US alone. One of Live Action’s upcoming initiatives this fall will be to advertise this number everywhere: on transportation, in the media, in advertising… all over the country. The aim is to raise awareness, and to inform and impact society.

How can we be pro-life in our neighborhood, in our city, and in our country? Abortion is not—or should not be—a lost cause. Consider the following ideas: