Padua: In the footsteps of St. Anthony and St. Leopold Mandic

Take a pilgrimage to what some people believe is the oldest city in Italy.

Padua is a fun Italian city to visit. It is quaint enough to feel like a small town, but it has all the services of a big city. Locals say that Padua is the oldest city in Italy, though it is debatable. It is true that its university is one of the oldest in all of Europe.

For the pilgrim, there are two or three main religious attractions. The pilgrimage destination par excellence is the basilica of St. Anthony. A lesser known Franciscan saint is the Capuchin St. Leopold Mandic, also interred here. For those who like religious art, the Scrovegni chapel, replete with frescoes by Giotto in his mature years, is a must-see.

St. Anthony is one of the most beloved saints in Christendom. Born in Portugal, he left the Augustinians for the Franciscans after being moved at seeing the remains of the five Franciscan protomartyrs, killed in Morocco, laid to rest in a Portuguese abbey.

Anthony set out for Morocco, too, hoping to preach the gospel, but fell ill and had to return to Portugal. His ship blew off course and he landed in Sicily instead, eventually making his way north and remaining in Italy, where he was known for his tireless service to the poor and the sick. His expert knowledge of scripture and eloquent preaching struck many – from the upper nobility to the illiterate and innocent — and even impressed the holy founder Francis himself.

After Anthony died, legends and miracles abound. He was one of the most quickly canonized saints in Church history. He was proclaimed a Doctor of the Church in 1946.

Upon exhumation, some three centuries after his death, his tongue and vocal cords were found to be totally incorrupt. St. Anthony’s feast day is June 13.

The Basilica of St. Anthony is the main attraction of all of Padua’s churches. Known locally as “Il Santo,” the basilica is breathtaking. Construction on it was begun shortly after St. Anthony’s death in 1230 and was completed the following century.

Designed by Nicola Pisano, it is covered by seven cupolas, or domes, two of them pyramid-shaped. Just after entering, there is a large monument to the left conserving the remains of St. Anthony. The marble tomb was decorated by the best artists of the 13th century.

Behind the main altar, in the apse, is a reliquary chapel. Here, the most important relics of St. Anthony visible to visitors. The best known relics are his incorrupt tongue and vocal cords. There is also the possibility to visit the cloister for a fee. 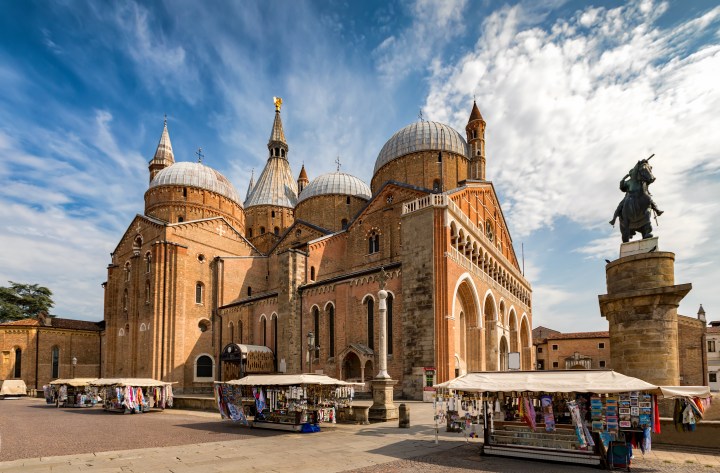 A lesser-known Franciscan saint is St. Leopold Mandić. Like Anthony, he was not Italian. He was born in 1866 in Dalmatia, today part of Croatia.

As a child, he suffered from health problems and remained very short in stature. He was clumsy, and he spoke with a stutter. Yet, he became spiritually strong. When he was 16, he entered the Capuchin friars in Italy’s northern province and spent the rest of his life in Italy.

Leopold’s main calling was as a confessor. For 34 years, he spent most of the day in the confessional. His fellow friars often criticized him for his leniency in always granting absolution. Yet, Fr. Leopold believed God’s mercy was limitless.

Leopold died from cancer at the age of 76. He was canonized by John Paul II on October 16, 1983. Leopold is hailed as the “Apostle of Unity” for his work to reunite the Orthodox and Catholic Churches. His feast is celebrated on May 12.

The Church of St. Leopold Mandic

The Capuchin church housing the remains of St. Leopold Mandic is located just outside the city center. As a result of the bombing during World War II, the church and part of the friary where he lived were demolished. But his cell and confessional were left unharmed.

He is said to have predicted this before his death, “The church and the friary will be hit by the bombs, but not this little cell. Here God exercised so much mercy for people, it must remain as a monument to God’s goodness.”

Located just outside the center of Padua, the Scrovegni Chapel is an important attraction. Built as a chapel to conserve the tomb of the noble Scrovegni family, it has been converted into a museum.

The museum displays one of the best-preserved medieval fresco cycles anywhere in the world. Giotto painted the cycle in 1305 toward the end of his life (he painted the St. Francis cycle in Assisi in his younger years). The frescoes depict the life of the Virgin Mary and Jesus as well as a Day of Judgment.

(Time permitting, don’t miss a coffee house called “Caffé Pedrocchi.” Built in 1831, its speciality is the “caffè pedrocchi” – a cappuccino-like beverage with a cool layer of mint-flavored cream on top of warm coffee. Adding sugar or mixing with a spoon is forbidden!)