The remains of St. Peter's brother are kept in a crypt in one of the loveliest places in the world.

Each year innumerable visitors flock to one of Italy’s top destinations: Amalfi. A UNESCO World Heritage Site since 1997, the windy stretch of coastline along the famed Amalfi Coast boasts stunning views of the Tyrrhenian Sea and characteristic hill towns.

In the Middle Ages, Amalfi was one of Italy’s four major Maritime Republics – along with Venice, Genoa, and Pisa. Beginning in the 10th century, Amalfians built fleets of ships with which they established extensive trade networks across the Mediterranean from Europe to Asia and Africa.

More so than the incredible scenery (and tasty limoncello), for Catholics, there is a little-known reason to come to the city of Amalfi. In the city’s Duomo (Cathedral) is a crypt preserving the relics of St. Andrew the Apostle, the brother of St. Peter.

St. Andrew is introduced in the Scriptures in the Gospel of Matthew:

As he was walking by the Sea of Galilee, he saw two brothers, Simon who is called Peter, and his brother Andrew, casting a net into the sea; they were fishermen. He said to them, “Come after me, and I will make you fishers of men.” At once they left their nets and followed him (Matthew 4:18-20); (see also Mark: 1:16-18).

According to tradition, St. Andrew went to Greece, where he announced the Gospel. It is believed he was executed in Patras by being crucified on an x-shaped cross. In 357, his remains were transferred to Constantinople, where they were placed in Emperor Constantine’s new Church of the Holy Apostles.

During the Fourth Crusade, in 1206, St. Andrew’s relics were brought from Constantinople to Amalfi, where they remain today.

Amalfi’s present cathedral was built adjacent to an older one, which was incorporated into it to form a single, six-nave Romanesque cathedral. The façade and exterior of the Duomo is a blend of Moorish, Byzantine, and European styles. Its stripes, arches and mosaics give it a striking appearance.

After a long flight up 62 stone steps, pilgrims can enjoy sweeping views of the Piazza del Duomo and sea from beneath the shade of an Arab-influenced portico.

The Cloister of Paradise, accessible from the left side of the portico, is one of the highlights of the cathedral. Built in 1268 to house the tombs of Amalfi’s wealthy citizens, it boasts a lovely garden and richly decorated walkways.

One enters the church through a medieval bronze portal that dates back to the Middle Ages. Commissioned by a wealthy merchant of Amalfi, it was the first of this sort of door to appear in Italy. Its original Romanesque interior received a Baroque makeover in the 16th and 17th centuries.

To the right of the altar is the Chapel of the Relics. Here are displayed dozens of reliquaries of saints brought to Amalfi at the same time as those of St. Andrew.

Within the right nave is a staircase leading down to the crypt. Below the main altar, among a magnificently decorated ceiling, columns, and walls, are the relics of the Apostle, St. Andrew. 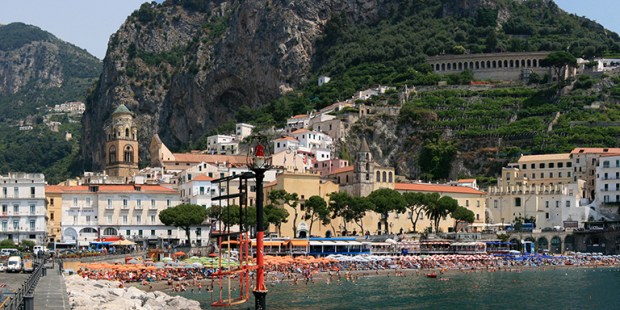 St. Andrew’s bones exude a liquid referred to as St. Andrew’s Manna. It is said this also occurred at his tombs in Patras and Constantinople. The liquid, collected four times a year, is purported to have miraculous qualities, though the Church has not issued any formal pronouncement regarding it.

The city of Amalfi – with its sweet seascapes and charming towns – is truly blessed.