A walking pilgrimage in Milan

The fashion capital of the world has a surprisingly long religious tradition.

“You have made us for yourself, O Lord, and our hearts are restless until they rest in you.”
St. Augustine

This is the first of two articles on a pilgrimage in Milan, Italy.

Many pilgrims to Italy go to Rome for its unparalleled Christian history. Other places – like Assisi, San Giovanni Rotondo, and Milan, known for its worldly atmosphere of business and fashion dealings – often get overlooked. While the capital of Lombard doesn’t necessarily bring to mind spirituality, Milan has, perhaps surprisingly, a long religious tradition. Religious travelers find a pilgrimage in Milan a rewarding and worthwhile journey.

City of saints and priests

Few Catholic dioceses around the world can boast of having two of the four Latin Fathers and Doctors of the Church: St. Ambrose and St. Augustine. St. Ambrose served as Milan’s archbishop in the 4th century and was one of the most influential ecclesiastical figures of the entire patristic period.

St. Augustine of Hippo studied in Milan. Intrigued by the oratorical skills of Ambrose, he converted to Christianity after listening to his sermons. With his mother, St. Monica, present, Augustine was baptized by St. Ambrose in the city’s cathedral at the Easter Vigil in 387. He wrote about his conversion in his most famous work, Confessions. 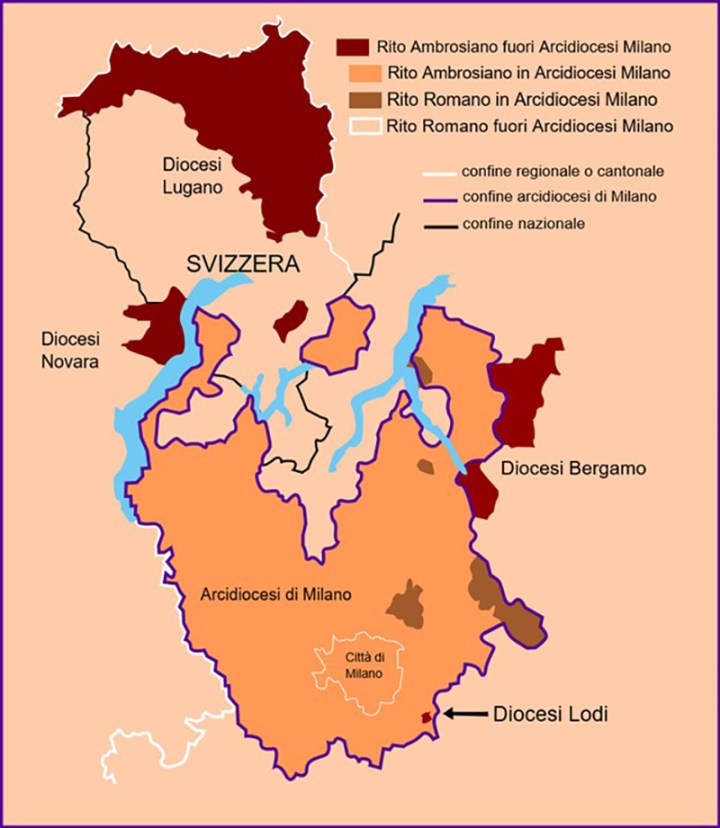 Another saintly archbishop who sat on Milan’s episcopal throne was St. Charles Borromeo in the 16th century. More recently, in the 20th century, Pope Pius XI and Pope St. Paul VI each vacated the episcopal cathedral of Milan after being elected to the papacy in Rome.

Today the Archdiocese of Milan is still a Catholic powerhouse. It is the largest diocese in Europe, and it has more priests than any other diocese in the world.

Another curious Catholic fact is that Milan is one of the few local churches in the Western Catholic world that has its own historic liturgical rite: the Ambrosian Rite. As opposed to the common Roman rite celebrated virtually everywhere in the western Catholic Church, Milan’s Ambrosian Rite is still used in the greater part of the Milan Archdiocese and neighboring areas.

Our religious pilgrimage to Milan starts at the Milan Cathedral, known as the Duomo in Italian. With its characteristic soaring pinnacles and spires pointing heavenward, the Gothic cathedral is instantly recognized the world over. The church took nearly six centuries to complete and is the fifth largest church in the world. It can seat up to 40,000 people comfortably (in non-pandemic times, of course). The vast interior, though notably dark, is replete with sarcophagi, decorated chapels, altars, statues, and numerous works of art.

Near the choir is the entrance to the crypt leading down to the tomb of St. Charles Borromeo (1538 – 1584). From a notable Milanese family, he was archbishop of Milan from 1564 to 1584. He is noted for having played a major role in the Counter-Reformation – the Catholic Church’s response to the Protestant Reformation launched in the Council of Trent. He was responsible for significant reforms in the Catholic Church, including the creation of the modern seminary. His feast day is November 4.

For a small fee, visitors can see the Tesoro del Duomo, or Cathedral Treasury, displaying a large collection of medieval art. Also in the crypt is a 4th-century Paleo Christian Baptistery as well as remains of earlier cathedrals. This is very likely the site where St. Ambrose baptized St. Augustine. It is also possible to climb to the roof, for a fee, for a magnificent view of the city of Milan.

The Duomo’s status as a place of worship and its history, as well as its architecture and artwork, make it a spiritual and cultural treasure.