A walking pilgrimage to Naples

First stop: The city's highly decorated Duomo, the site of the ongoing miracle of San Gennaro.

Modern Naples is a city of eccentricities and ironies, to be sure. Though it is notorious for its urban blight, Neapolitans are fiercely proud of their city.

Neapolitans have ample positive reasons to take pride. Naples is one of the oldest continuously inhabited cities in the world, as it was a main hub of Magna Graecia. Millennia later, in the 18th century, Naples was on par with Vienna, Paris, London, and Florence as one of Europe’s most regal cities, testified to by the royal palace in nearby Caserta. More recently, the city has the distinct honor of having invented the pizza.

For pilgrims, there are plenty of reasons to come. Naples has numerous churches – constructed and embellished by past royalty and nobility. Additionally, Neapolitan popular religious traditions and devotions – especially to saints – are legendary. In a city that has no less than 52 patron saints (yes, fifty-two), Neapolitans are just as loyal to their saints as they are to their storied soccer club, Napoli.

A walking pilgrimage in Naples begins in the city’s highly decorated Duomo, or cathedral. Originally built in the 4th century as a Christian basilica over a pagan temple dedicated to Apollo, the present edifice is in the French Gothic style from the High Middle Ages.

While some visitors enter to admire the notable artwork, impressive nave, funerary tombs, and decorative side chapels, most pilgrims are drawn to the Chapel of St. Januarius – the city’s main patron saint.

St. Januarius (San Gennaro) was a bishop martyred under Diocletian around 305. His body was brought to Naples around 400. Few details are known about the saint’s life, though legends of miracles abound.

The best-known miracle, still ongoing, relates to the saint’s blood. There are two vials containing San Gennaro’s coagulated blood, which liquefies three times each year. On September 19, the saint’s feast day, the archbishop of Naples presides over a Mass and ritual marking the liquefication.

After the blood liquefies, the bishop places the vials on the altar for eight days so the faithful can venerate the relics. A 21-gun salute then sounds off from the 13th-century Castel Nuovo near the port.

It is said that if the blood fails to liquefy, a calamity will take place in or around Naples. Indeed, in 1980, a year in which the blood did not liquefy, a devastating earthquake took place in nearby Irpina, killing 2,500 people. 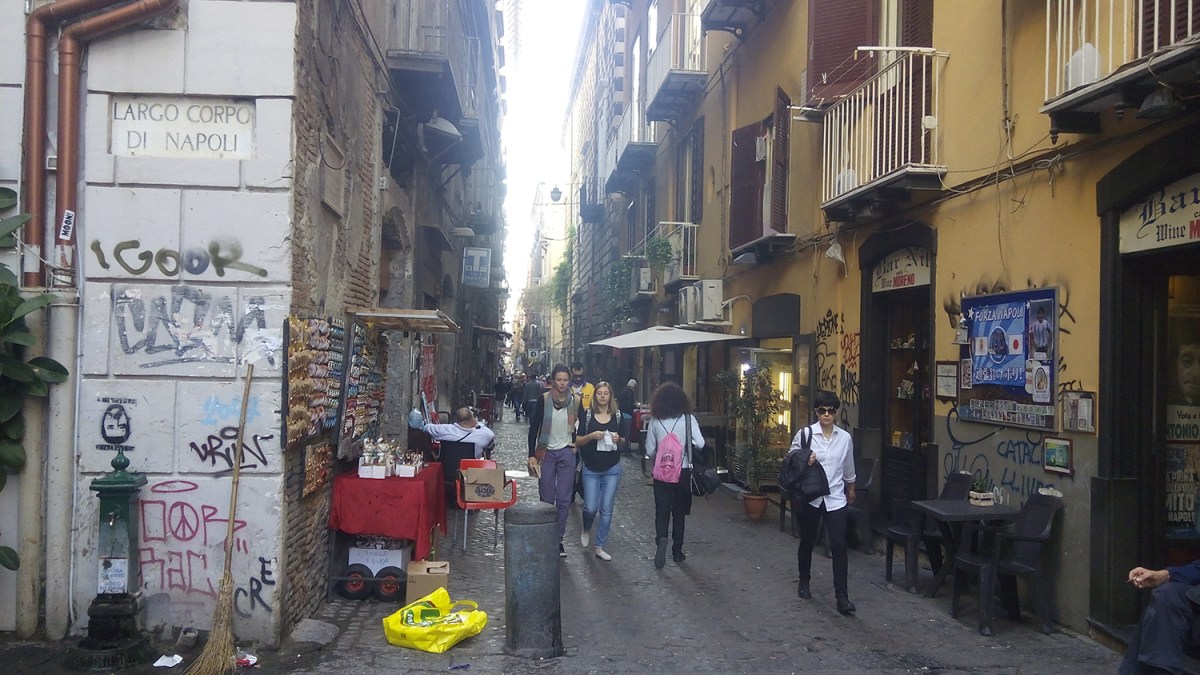 For your next stop on the pilgrimage route, a visit to Naples Underground may be worth a detour. Though not a religious site, a tour of the labyrinthine tunnels beneath the city provides an interesting and educational experience of the history of Naples.

The next stop on the pilgrimage route is not so much to a place as to a craft: the famed Presepi (Nativity scenes) of Naples.

Directly in front of the basilica of San Paolo Maggiore is a small square. Just beyond it is the narrow, crowded street known as Via San Gregorio Armeno. This is the center of Naples’s Presepe district.

The Italian word, presepe,derives from Latin, praesepium meaning “crib.” The Nativity scenes have a long and storied tradition in Naples. As early as the High Middle Ages, artists began sculpting life-size Nativity scenes of the Holy Family out of marble or wood, or later, papier-mâché.

In the 18th century, the presepe reached its golden age in Naples. By then, they were no longer exclusively objects of religious devotion. Instead, the nobility and wealthy bourgeois had begun commissioning similar figures to decorate their aristocratic homes and compete with their neighbors.

The Neapolitan Presepe tradition is still alive and vibrant along Via Gregorio Armeno. There are still workshops that have been run by families for generations constructing handsome, high-priced works.

Read more:
The “urban shrines” where Catholics in Naples, Italy, stop to pray