The miraculous story of the Maltese Lady of the Grotto

Courtesy of the Malta Tourism Authority

Around the year 1400, the Virgin Mary is said to have appeared to a hunter in a cave. In a short time, the cave became a chapel, and then a church, and then a priory.

Devotion of the Maltese to Our Lady of the Grotto has existed for many centuries. Its origins go back to around AD 1400 when Our Lady is said to have appeared to a hunter in a cave, close to Mdina. This extraordinary event was passed from one generation to another, but was not documented until AD 1670, when a Dominican Historian, Fr. Francis Mary Azzopardo, wrote the event in Italian. Lack of documentation for such a long time, however, did not stop the people from believing the story handed down by tradition. Indeed, through the centuries, the devotion of the Maltese to their Madonna of the Grotto never faltered. The faithful soon started to visit the cave and to pray before Our Lady’s image. In a short time, the cave became a chapel, which increased the devotion even more.

Read more:
A close look at the ancient Sanctuary of the Immaculate Conception of Qala, in the Maltese islands (Gozo)

As far as we know, the first Papal Legate confirming this new devotion among the Maltese was made by Frederick de Bordino, who in his will (AD 1414), left oil for the lamps to be lit before the image of Our Lady. Originally, the feast day used to be celebrated on the 5th of August (feast-day of Our Lady of the Snow). After Our Lady of the Grotto’s crowning in 1957, the feast was held on the Sunday closest to 2nd June – the day of the coronation. This feast has been celebrated uninterruptedly every year, however, due to the important celebrations which fall in June, it was moved to May.

Devotion to Our Lady of the Grotto gathered momentum when, around AD 1450, three Dominican friars from the Sicilian Province founded the Order in Malta and requested to be given the cave where the Blessed Virgin appeared, which was granted soon after. Very shortly, Marian devotion increased to an extent such that the crypt became too small for the visiting devotees. For this reason, the Dominicans had to build a larger church and a new priory. Right from the very beginning, they named the Church and Priory for Our Lady of the Grotto. During this period Malta was constantly under the threat of an invasion, in fact, in AD 1551, the Turks vehemently assailed the island and seized the Priory.

Graces granted by Our Lady of the Grotto

In AD 1630, the oil lamp in front of the Madonna kept burning, even though the Church was closed for four days. A few days later, a woman took some of the oil and applied it to Gian Maria’s limbs, her paralytic son. He was cured instantly! Another miracle performed was that granted to Tommaso Gioanello from Cospicua.  In AD 1640, while working on a galley, a mast fell down and struck him on the head. Seeing the mast falling he cried out to the Madonna for help. He was on his feet a few days later. In 1887, a cholera outbreak struck the Island.  Many invoked the Lady of the Grotto and were healed. Twelve years later Malta was hit by another epidemic. This time it was smallpox. Msida was the worst hit. The Parish Priest led his community in prayers to Our Lady of the Grotto and she heard their prayers. Msida was delivered from this scourge the moment the vow was made.  A certificate was issued by the local medical officer, and all the locals signed declarations. These documents are in the Rabat Priory.

On the 13th February 1954, a boy from Lia got meningitis. The next day he was taken to hospital and his parents were informed that their son’s life was in danger. The boy’s grandmother made a vow to Our Lady of the Grotto; a neighbor of theirs also prayed for him and promised to visit the Sanctuary and to distribute holy pictures of Our Lady of the Grotto if the boy was cured. On March 1, the boy was discharged from hospital.

Read more:
The ancient Marian icons of the Greek Catholic Church of Our Lady of Damascus in Valletta, Malta

Our Lady of the Grotto has always had tender love for mothers. As a matter of fact, another amazing story, occurring in 1954, is that of a woman from Dingli having a very difficult and precarious delivery, as she was suffering from high blood pressure and kidney ailments. The doctor had recommended hospitalization and warned the husband to prepare himself for the worst. All the family and neighbors of that small village prayed Our Lady incessantly. A pilgrimage also left the village parish for the Church of Our Lady. The woman also used Our Lady’s oil, given to her by a neighbor, to make signs of the cross. On the 3rd May, the woman gave birth to a son in just an hour!

Images of Our Lady of the Grotto and Tears of Blood

Little is known about the first image of Our Lady following the apparition to the hunter. No documentation exists concerning the image’s authorship, or how the Blessed Virgin was depicted. A painting could have possibly been produced on wood and hung in the grotto; or probably painted directly on the wall of the crypt – at the time a more commonplace practice. Around 1600, the friars decided to place another image in the grotto; this was sculpted in white alabaster marble in Sansovino style. It showed Our Lady tenderly holding and watching her Son Jesus. In the first half of the 18th century, the Dominicans commissioned extensive restorations works to the crypt, including another image of Our Lady, this time sculpted in Maltese stone. The friars replaced the heavily damaged marble relief with this new image, and commissioned restoration works of the old one. Although the marble image was removed from the crypt, people still persisted in expressing their devotion towards it. As a matter of fact, in 1887 the friars decided to reinstate the old image in the crypt, and the stone sculpture was placed in the newly built chapel serving the Dominican students’ house in Rabat.

Read more:
Malta, a land of Marian devotion and veneration

In 1980, the Dominicans decided to order a marble replica from Italy, so as to save the original. The latter was ageing, and suffered extensive wear and tear, especially during processions connected to the festivities and pilgrimages. In fact, the friars feared that irreversible damage would occur if it was subjected to further handling. Indeed, it had already been broken into many pieces and subsequently restored. By 1981 the replica arrived in Malta. In 1999, some devotees noticed a dark spot close to the eye of the new sculpture of Our Lady and Child. At first, for some reason, nobody reported this. However, on May 6, a woman noticed a reddish tear from the Virgin’s right eye, and immediately informed the Prior and the Provincial. The Sexton-General was called on site too, but before the witnesses conveyed what had happened, he wiped the tears of the Virgin’s face.  The Prior’s reaction was that if it’s a miracle the tears will reappear.

The next day no reddish tears appeared, at least until 6.00 pm.  Ten minutes later, the same woman visited the Church and again saw reddish tears trickling from the Virgin’s eye.  Again, she alerted the Prior who informed at once Archbishop Joseph Mercieca. Mgr. Mercieca took immediate action and set up an Inquiry under the supervision of the Vatican’s Congregation for the Doctrine of the Faith.  Forensic studies were also carried out.  On December 12, 2003, The Archbishop’s Curia issued a press release in which it recommended that the  members of the Church in Malta should keep alive, and strengthen their traditional love for Our Lady. It also stated that it is the Archbishop’s wish, that in the light  of the Report of the Commission of Experts, and advice of the Congregation for the Doctrine of the Faith, it would be worthwhile that this love of the Maltese towards the Madonna continues to embrace, in a worthy and authentic manner, the age-old devotion towards the image of Our Lady of the Grotto. That same day, the Malta Dominican Province too issued a press statement which was published on the 13th December.

Make sure to visit the slideshow below for a virtual detailed visit of this cherished Maltese Marian sanctuary. 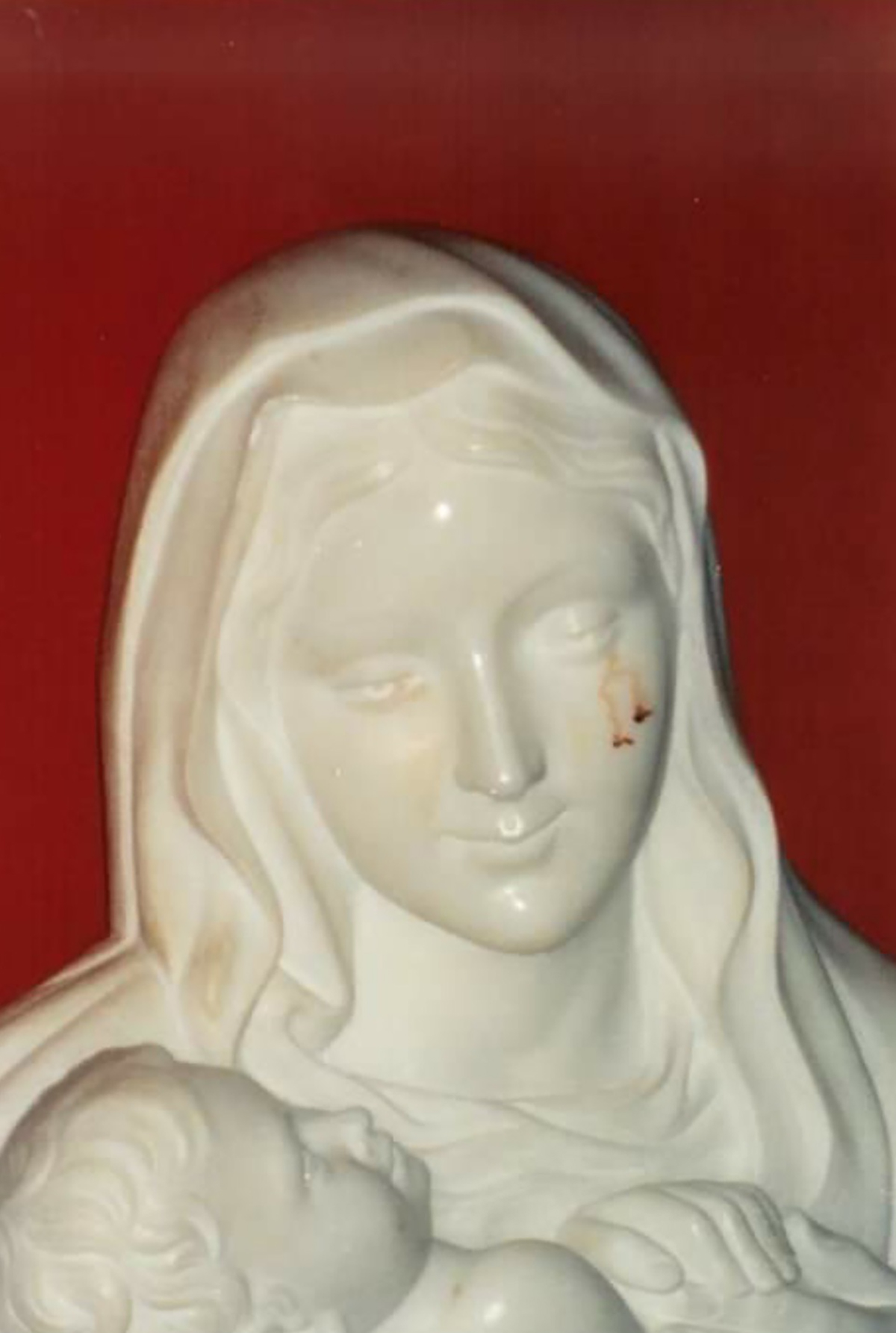