The miraculous story of Our Lady of Ta’ Pinu National Shrine, in Gozo

The beginnings of the devotion to the Blessed Virgin of Ta’ Pinu are so ancient that they are lost in the midst of time.

The Shrine of the Assumption

The beginnings of the devotion to the Blessed Virgin of Ta’ Pinu are so ancient that they are lost in the midst of time.  Before taking the name of Ta’ Pinu the local church was a small chapel, known as Tal– Ġentili, dedicated to the Assumption, which existed before 1545 AD. Documented records show that it had been rebuilt, which means that the Chapel was there long before 1545.  In 1575 the apostolic visitor Pietro Duzina, delegated by Pope Gregory XIII, found it in a very bad state, so he ordered its demolishing. When demolition began a workman broke his arm when he struck the first blow – this was taken as an omen and that the chapel should be preserved for future generations. It was the only chapel on the island to survive Duzina’s decree. In 1587, the chapel’s property changed hands and consequently, the name Tal-Ġentili was dropped and it became known as Ta’ Pinu – named after Pinu Gauci who had become the procurator of the Church in 1598, who paid for its restoration, and also commissioned the painting of the Assumption of Our Lady for the main altar.

Eventually, due to the happenings of 1883, the modest unknown chapel in the countryside became a revered Marian Shrine, visited by droves of Gozitans, Maltese and people beyond the sea! Indeed, a few years later the decision was taken to build a worthy sanctuary, in honour of the Mother of God, to accommodate the huge crowds. Due to some setbacks, construction of the church began thirty years later, in 1920. Indeed, 30th May 2020, was the centenary of the blessing of the first stone. The neo-Romanesque church was constructed in front of the old chapel, which remains intact behind the altar, and still houses the miraculous painting of the Assumption of Our Lady.

In 2015 Centro Aletti of Rome, which is under the direction of Fr. Marko Rupnik S.J., installed mosaics on the Façade of the Basilica; and in 2017 the Mosaics for the whole perimeter of the spacious parvis, depicting the mysteries of the Holy Rosary, were also inaugurated. These works of art were commissioned by Fr. Gerard Buhagiar, rector of the Shrine. The mosaics of the parvis are presently Centro Aletti’s largest in the world on the exterior of a Sanctuary. It is noteworthy that Fr. Rupnik’s works are all over the globe in major sanctuaries, for instance, the Vatican, Fatima, Lourdes, Washington, Brazil, Slovenia, and Madrid. Droves of pilgrims, faith tourists and academics specifically travel to study his art. Also, this year, Fr. Gerard contracted Aletier del Restauro, who also restored the 13th century painting of Our Lady of Mellieha and the 12th century Icon of Our Lady of Damascus, to carry out research and restoration works on the image of the Assumption. The exceptionally revived image was unveiled on 20th June 2020, just two days before the feast day, and 137th anniversary, of the visitation of Our Lady of Ta’ Pinu.

The visitations of Our Lady of Ta’ Pinu

The earliest historical research about this Marian sanctuary, in 1891, published as La Beata Vergine Ta’ Pinu a Gozo (The Blessed Virgin of Ta’ Pinu in Gozo in Italian) it is written, “On the 22nd June 1883, Karmni Grima from Gharb, ….. heard a call on her way home. …..[At] about 10.30am.  A mysterious voice called her three times:‘Come! Come! Come!’.Karmni was astounded, because at that time of the day, the fields were deserted, and no one could have possibly spoken to her. [When] she resumedher way the same mysterious voice again told her: ‘Come, come, today, because a year will have passed before you will be able to visit this place again’. So she walked towards the chapel in awe figuring that she would see the Blessed Virgin. On approaching the chapel, …she peeped through the little aperture in the door pane but saw no-one.

Recovering her composure, she entered the chapel and as she prayed, a feeling of ineffable rapture gripped her. …The same voice addressed her again: ‘Recite three Hail Marys in remembrance of the three days during which my body lay in the tomb’ – and so she did. In his book ‘Ta’ Pinu Shrine. The Pilgrims’ Haven’, Bishop Mgr. Nicholas J. Cauchi (Bishop of Gozo from 1972 to 2005), writes: “For two years Karmni said not a word about what had happened. Then she disclosed her secret to Franġisk Portelli; [an upright] man who was renowned for his devotion to Our Lady of Ta’ Pinu. …as his heart filled with joy….. At about the same time, he had heard a mysterious voice asking him to say prayers in honour of Christ’s hidden shoulder wound caused by the weight of the heavy cross along the torturous path to Calvary.  A short time later, Franġisk’s mother was miraculously healed by the intercession of the Blessed Virgin of Ta’ Pinu. It was obvious that the matter could no longer be kept secret and rumours that Our Lady of Ta’ Pinu had given a message to two persons from the village of Gharb began to spread like wildfire.” Extant documents written by Karmni’s spiritual director also testify that the Blessed Virgin appeared to her even at her home in the village of Gharb. Today, Karmni’s home is open to visitors.

Ta’ Pinu Marian Shrine is also known as “The Church of Miracles”. During an interview in 2017, the rector of the sanctuary, Fr. Gerald Buhagiar, said that many people visit the shrine and pray for the intercession of the Blessed Virgin Mary. Many of these people return to Ta’ Pinu to give testimony to their prayers being answered. In fact, votive offerings (ex-voto) literally cover the walls of two rooms on either side of the altar at Ta’ Pinu. These relate to cancers cured, babies born after years of infertility, horrific accidents resulting in completely healed patients, and many, many more amazing happenings and graces!

The image of Our Lady is so important to Gozitans and Maltese that copies of the painting can be found in shrines all over the globe where Maltese and Gozitan people have emigrated to, including the United States, Australia, India, Europe. Another custom is the first Saturday closest to 2nd February – After baptizing babies, the Bishop of Gozo, together with the parents, present children to the Blessed Mother of Ta’ Pinu, and ask Her to protect and love their children.

Our Lady of Ta’ Pinu and the Papal legacy

The Shrine of Our Lady of Ta’ Pinu was consecrated and opened to the public on the 13th December 1931, and in 1932 it was raised to Minor Basilica by Pope Pius XI. While on the 20th  June 1935, the Holy Image was crowned by the Pope’s Legate. On the 26th May 1990, Pope Saint John Paul II, placed a halo consisting of five golden stars to testify the Maltese People’s devotion to their Blessed Mother.  On the 18th April 2010, Pope Benedict XVI adorned the venerated image with a golden rose. On this occasion, he poured out his heart, and said,“I am aware of the particular devotion of the Maltese people to the Mother of God, expressed with great fervour to Our Lady of Ta’ Pinu and so I am pleased to have the opportunity to pray before the image …. I am also delighted to present a Golden Rose to her, as a sign of our shared filial affection for the Mother of God. I ask you in particular to pray to her under the title Queen of the Family…”.

Pope Francis too was supposed to visit on the 30th May this year, but unfortunately the visit had to be cancelled due to the pandemic. Nevertheless, we are confident that the Holy Father will visit us once it is possible to do so.

Our Lady of Ta’ Pinu beckons

As time passes and the Ta’ Pinu experience becomes ever more known in the World, Karmni’s and Frangisk’s experiences will fire the imagination in the way Bernardette’s of Lourdes and the Three Little Shepherds of Fatima have done.  From a splendid Marian Sanctuary hallowed by the visit of Popes in the minute island of Gozo, millions of Faithful will one day hear and respond to the plea of Our Lady. Like Karmni and Frangisk we all have ears to hear the Blessed Virgin inviting us passionately to visit her shrine. ‘Come, Come,’ She said to the two humble farmers. They had ears to listen and to act accordingly. Let us hope that millions of the present generation have also ears that hear and respond to the Blessed Virgin’s invitation.

Make sure to visit the slideshow below to discover more of the beautiful details of this magnificent Maltese Marian shrine. 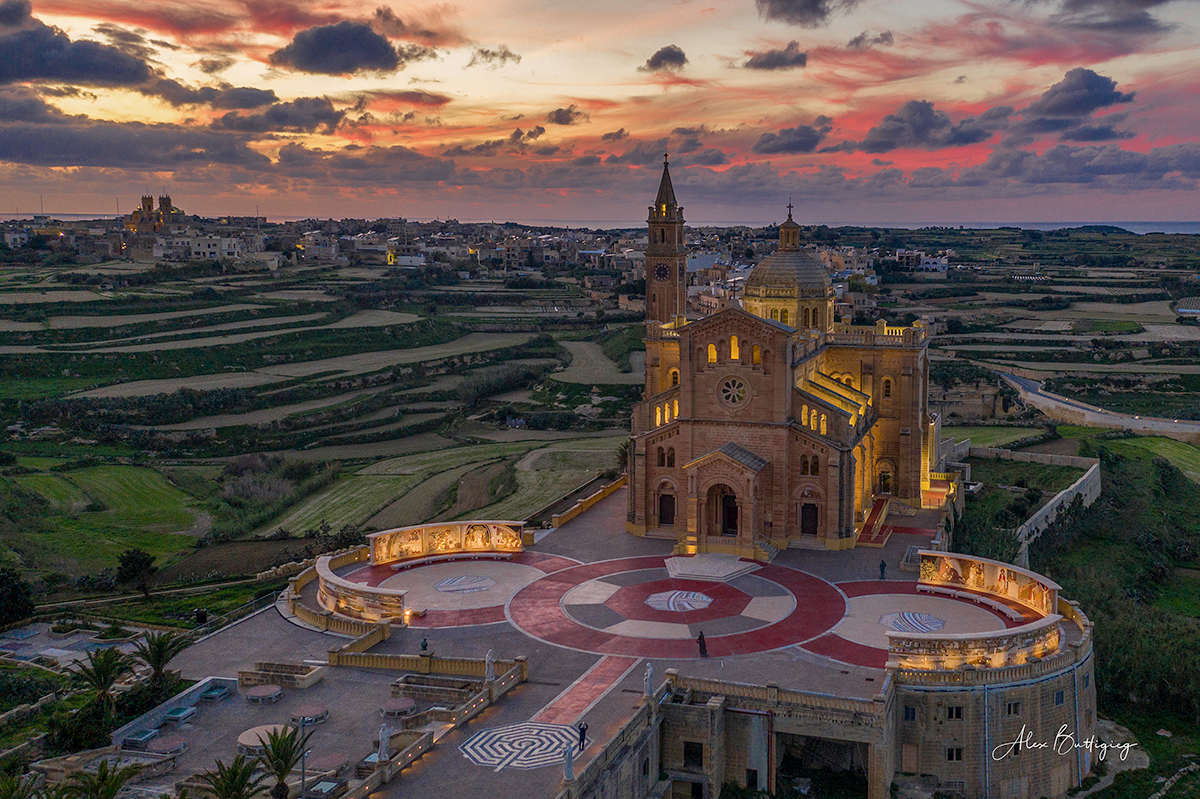